The then hidden beauty of Europe, is now a mist visited place at Czech! With Romanesque, Gothic, Baroque, Renaissance and Art Nouveau architecture, Prague sets an example of being the most diversified tourist attraction. With picturesque attractions captivating you on both this sides of the road, Prague can be called a heaven for beauty lovers. This place flaunts some of the best heritage sites, impressive historical monuments and mind blowing natural essence. When visiting here, you’ll be perplexed hy each of its alley, but let’s discuss some of the very best attractions at Prague.

The 14th century saw the beginning of St. Vitus Cathedral. Prague Castle began as a wooden fortress with earthen bulwarks in the 9th century; by the 11th century, it included a royal palace. The castle buildings consists of royal palace, a cathedral and three churches, a basilica, a monastery, defensive towers, royal stables, a tiny lane where craftsmen worked and magnificent gardens. This beautiful monument will keep you gazing at the ancient beauty without blinking your eyes. 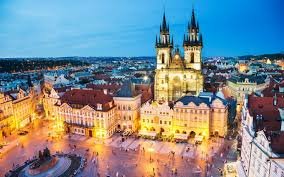 Standing right at the centre of the old town at Prague, you can find the Old town hall. Every hour between 9 a.m. and 11 p.m. the 12 Apostles appear on the astronomical clock. This building walks back to being established back in 1338 being the seat of the old town administration. The Old Town Hall’s astronomical clock has been repaired and maintained for over 600 years, making it the third oldest clock in the world.

Prague’s Old Town Square lies between Wenceslas Square and the Charles Bridge. Some astonishingly beautiful architectural sites like Romanesque, Baroque, Rococo, Gothic and Renaissance can be found here at the old town square. This is what attracts loads of tourists at this square each year.

The 600 year-old Charles Bridge, Prague’s most famous landmark. Built under the reign of King Charles IV during 1357, this bridge will give you an ecstatic view of the Prague castle from one side and the view of those who climb the steps of the bridge the other side. This area is always buzzing with toursits checking the bridge, the pedestrian statues, the local market and much more.

Created by Czech architect Valdo Milunic and Canadian Frank Gehry, this excotic infrastructural site of Prague contains an iconix attractiveness in itself. This building structure resembles a female dancer swaying in the arms of her male partner, the Fred Astaire and Ginger Rogers of the architectural world.

Apart from these, Prague has innumerable incredible buildings and sites to be seen and which couldn’t be described in words. If represented perfectly, Prague is a perfect example of the variety that any country can offer!