Mumbai, the city that never sleeps! It’s a dream city and the financial capital of India. The one city that have got everything for everyone. Be it a dreamer, an aspirer, a survivor or a traveller, the city never returns anybody empty handed. Complimenting its progressive nature, the city has some beautiful attractions to offer for wanderlusts too. Want to know what are those, read along! 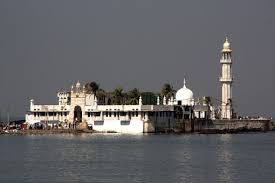 The iconic spot of the city standing amidst heavy flowing river since1431! It’s an enchanting shrine of Hazrat Haji  Ali, a religious head of Muslims. Though, the place has an unavoidable history for the Mohammedarian sector, even tourists and locals of other religions are found praying here. You have to walk the long, narrow path before you enter the grand dargah and later near the mosque and shrine. There is also a way from behind the shrine that connects it directly to the sea. Though Mumbai have faced lots of sea mishaps, tsunami, floods in the past 400 years, but it’s really astonishing how this place seemed to have been untouched and unharmed even though it’s placed in the middle of the river. This is also one of the reasons why people from across the globe are curious to see this astounding attraction.

No, we aren’t here discussing anything about her highness queens necklace literally, it’s actually a tag given to Mumbai’s most favourite spot, Marine drive. The one place that’s visited most often, almost daily by the locals and without fail by the tourists. They just love exploring the city lights from catching a view across the whole circle adorning the great sea Mumbai is surrounded with! That’s why it’s called queens necklace, it adds to the beauty Of  the city by giving everyone a stunning view of the gorgeous city itself! 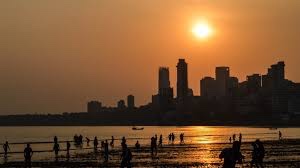 We know the fact well that Mumbai is an island. It stands with pride guarded by water on all its sides. This have given rise to some enchanting beaches on the place too. Who doesn’t relate to the world chowpatty when they are at Mumbai! Be it Juhu beach, or Girgaun chowpatty or Aqsa beach or Ghorai beach, they all have something to give to all the beach lovers on this land. If you are a visitor here, you can choose any of the one and take your time enjoying the sun, sand and the sea. But most of the times locals here prefer visiting the beaches during night. Whatever the times, Mumbai beaches are worth paying a visit!

Another breathtaking natural destination of the city that’s connected to the city. Even if you aren’t a sea fan and have no interest in watching the waves, the bandstand has got some old remains around its corner which is a great thing to explore if history interests  you. For sea lovers, the noisy sea waves, the huge natural rocks and the captivating sunset scene does the trick!

Previously known as the Victoria terminus, built during the British rule in India, it’s got itself listed in the heritage sites of the world. It’s a huge expanse of impressive archeology and artistry expanding over a large area at the souther side of the city. It’s an active railroad station which prides in occupying a large number of crowd at the same time in it. On most of the prominent times of the year, the CST is adorned with enchanting lights which really attracts lots of travelers towards it.

Apart from these you mustn’t miss visiting the Gateway of India, priyadarshini park, joggers park, the museum, Taraporewala aquarium, city zoo and more such amazing sites. These all comprise and make together a grand Mumbai, aamchi Mumbai!