A silent message to humanity!

It was the fourth round of the seven course lavish meal, huge chunks of chicken, fish, prawns and duck meat piled up in each plate. The guests holding the plates seem to be more interested in their conversations rather than the food varieties on their plates. The gravies half spilled on the floor, some on their plates and more on the serving bowls were more or less untouched. There lay piled up in different rice plates almost four types of biryanies, fried rice and noodles. But guests just went on with the routine of taking it on their plates and tasting just one or two spoons and left the rest in the plates that was taken to the dustbins from there onwards.

On the other hand Priya was busy staring other kids having their lunch during the recess break at school. Even she was feeling the churning in her tummy, but since it was 28th of the month, maa told,”eat this khichdi tummy full before you go to school, for four days from now, I won’t be able to give you anything for your lunch box. Even bhaiya and didi manage without their tiffins. You can also try. Come home, then I’ll heat the khichdi again for you, you can have that, ok dear?” This was the story of each month. Either by 28, or 29 each month, the chapati she would else take in her lunch box couldn’t be made because babuji was a clerk and his nominal salary hardly stretched so far. After the bell rang, the children rushed back to the class after having their lunch in the ground. She started running towards the ground and picked up the scattered biscuit packets, some of them had half or quarter biscuits in them, she ate them all greedily hiding from all the people around in the corner of the ground. With teary eyes she thought, when will the day come when even she can bring biscuits to school? For sure, she would share it with her friend who couldn’t bring that so that no other chutki has to rumble up the garbage for it.

Once again today, mamta and his husband mahesh went to bed with an empty tummy. Mamta being a house maid and mahesh being a cobbler could only afford plain cooked rice to be eaten with water. Their preparations was enough to feed their two kids everyday and them thrice a week. Still, they were happy that atleast their kids don’t have to sleep hungry today.

Meanwhile, far in the line of slums, gauri was trying hard to feed her baby, she was breastfeeding him. The baby was crying too much, he couldn’t get any feed from her mother. Tears of helplessness flew from gauri’s eyes. She was trying so hard to feed her baby, her only child, just a few months old. But, how can she do so when she herself haven’t eaten just more than a plain bread since three days. God, if she only she can do anything just anything to make some feed available for her baby. Even after an hour of trying desperately hard, his baby was crying more loudly now. He has been trying to get feed since morning and finally, the wailing stopped. But the child wouldn’t move. She screamed,” tai, maasi, please come fast! Just see munna isn’t moving, he is not crying anymore tai.” And soon there was a rush of people holding the screaming gauri away from her dead baby. The baby that died after crying for hours for few drops of milk but couldn’t get it because his mother haven’t had food for days.

Today, when we eat those extra spoons of delicacies inspite of being too full, don’t we remember there are millions of children not getting their basic share of 3 meals a day! When we waste plates full of meals in a wedding, don’t we know there are girls who can’t get married because their parents can’t afford to afford wedding meal for the baraties in the wedding! When we throw away the plastic bags that contains the remains of our daily meals, don’t we remember those kids who tear these bags at late night and greedily have whatever it contains! When we go to a restaurant and leave the unfinished meal for the waiters to throw away in dustbins, dont we remember those mothers who wait outside those restaurants just to get those food from them in the form of charity! 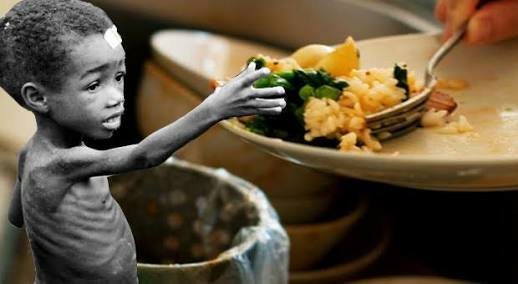 As a food blogger, I request you all to take in the silent message in this blog and do consider for these people the next time you have a heart filled meal. For us, meals are what satisfies our heart, not something that satisfies our hunger! We often eat out of temptation rather due to hunger. For us, the feeling of hunger ain’t pain, rather it’s a daily routine. For some, hunger is a pain, the cure of which they hardly get. From now onwards, let’s have food as a need rather than luxury. Let’s indulge in eating process without going through the sin of wasting it. Let’s not waste food anymore, let the meal of others reach them through our little efforts. Each efforts counts, let’s put in our little efforts to bring out this desirable change in society.

Save a life today, donate food or don’t waste it because your feed is someone else’s need today!